Every time I paint with oils, I tend to see colors in undertones. Even driving down the street, sights like trees, grass and clouds seem to show a deeper color, a color beneath the surface.  A melody of undertones displayed under the surface of things only to be revealed when light hits just the right way at different times of the day.

Even in fine photography, time and place will give a different light to a photo, as well as the season it was captured in.  Every season in itself has its own kind of beauty. It seems like sunrises and sunsets are more vivid in the gray and dark days of winter and with the light of the Fall, the season reveals gold and red tones. Spring, represents newness in light bright colors against black backgrounds. In the Summer, blankets of grasses and flowers are present in the countryside; valleys of wild grasses and flowers are in shades of yellow as far as the eye can see.

Valley, in definition means... a low stretch of land between hills, especially one that has a river flowing through it.

In the valley, we fail to see the multi color displays on the nearby mountains and sky beneath the shadows of the fog.  Valleys are where we develop the trust that the fog will lift and reveal just the right light to reveal the layers of colors, some maybe man has not even discovered yet.


fact notes...
If you live in a valley, you probably get more fog than they do up in the hills around you. Fog tends to be more common down in the valley, the low area that often forms near a river.


Grace works that way. It's a kind word from a gentle person with an impossible prayer.
It's a force sometimes transmitted best
hand to hand in a dark place.
~Bob Goff

The theory of color has me thinking! I have heard of people that died, went to heaven and came back and seen colors that are not even here on earth.  I wonder if those colors are here on earth but the light is so different here that the undertone is not revealed.  Hmm. :)

fact notes...
Albert Munsell brought attention to a systematic way of defining color.  He believed there are three different dimensions to describe color.  His three dimensional color theory built a bridge between art and science. He even compared music and notes with this theory.

"in music, one can simply hear a note and how it relates to other notes based on the position of the note on the staff".


This is very interesting!I have to study more on this when I have the time, it kind of reminds me of shape notes and how we hear them.

How shape notes have a three dimensional sound (at least) in one note.

“It may sound strange to say
that color has three dimensions,
but it is easily proved by the fact
that each of them can be measured."
~Albert Henry Munsell


How color impact your psychology, behavior and emotions is another story!  The emotional nature of color itself can affect your mood. This is a complex issue that has been studied for centuries. For example blue/calming, yellow/cheerful, green/nature.


Blessed are those whose strength is in you, whose hearts are set on pilgrimage.
As they pass through the Valley of Baka,
they make it a place of springs;
the autumn rains also cover it with pools.
They go from strength to strength,
till each appears before God in Zion.
Psalm 84:5-7

There I will give her back her vineyards,
and will make the Valley of Achor a door of hope.
There she will respond as in the days of her youth,
as in the day she came up out of Egypt.
Hosea 2:15

So do not fear, for I am with you; do not be dismayed, for I am your God.
I will strengthen you and help you;
I will uphold you with my righteous right hand.
Isaiah 41:10

Join team World Vision Global 6K for Water!
On May 6th, 2017, I will be joining thousands of others around the globe to run 6k and provide clean water to children in communities around the world.
http://www.teamworldvision.org/index.cfm?fuseaction=donordrive.participant&participantID=68196 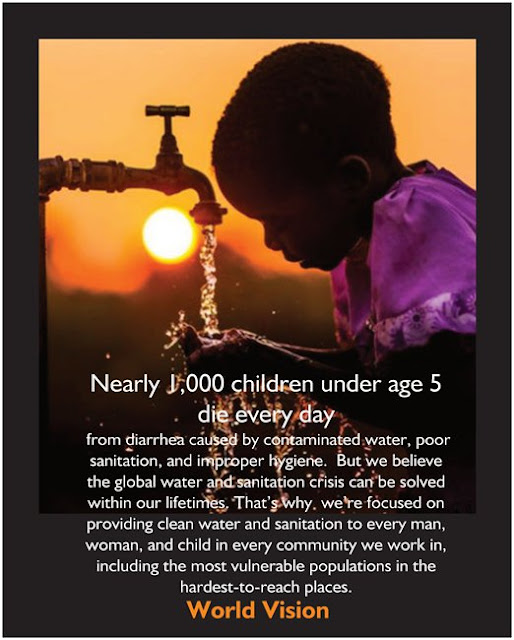