Walk a couple miles in someone else’s journey and I can almost guarantee a couple of things. We’d be less harsh, less apt to think we’d do better, less tempted to think we know stuff we don’t really know. And much more willing to just give them a bandaid for their blisters, a kind prayer, and a glass of ice cold lemonade.
Lysa TerKeurst 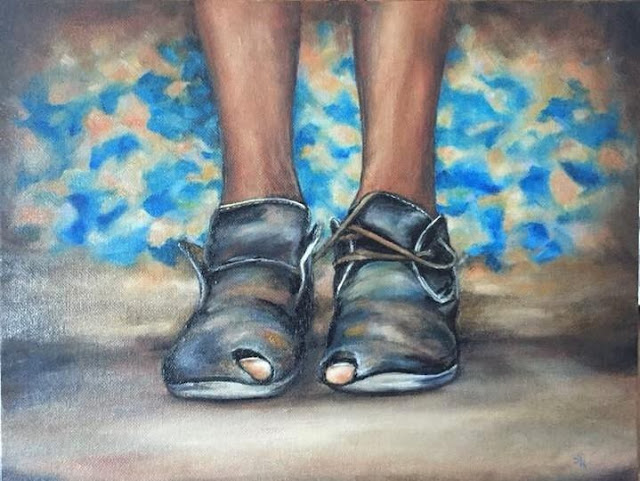 The first time I saw this photo  I was struck by it, it was profound and mesmerizing.  It told the whole story of what it means to be a child living in poverty going to school in holey shoes.  There was a richness also in it, although this picture was saying so much more.


I named this piece "In His Shoes".  In all that we go through we know that Jesus went through the same things. He walked with the poor, the suffering and the outcasts. He was called names, ridiculed and beaten. (it has been a ruff couple months but not as bad as all that) :)

Every painting I did in this series told a story of a child
and what it was like in their world.
The timing of every piece I was working on
and all the things that were happening in the world (and in my world)
was undeniable.  A miracle, God be the glory!

I kept thinking of the bible verse,
Jesus replied, "No one who puts a hand to the plow and looks back is fit for service in the kingdom of God." Luke 9:62
but I had no idea on how much would be holding on to that verse this summer to complete this!
I have an event this Fall with some kids up for sponsorship so I pick out some World Vision photos (with permission) that had to do with sponsorship and why it works for children suffering around the world.  This particular photo by Laura Reinhardt was so moving to me that I decided to make it my final one in the series.  I have had this song on my mind all week, so I finished painting this last piece by music,
Lauren Daigle‘s new song “You Say”
(in this video.  In His Shoes)

I could only see His feet while painting this!

I hope you can too!

Thank all of you that have been following along with me this summer.


To donate to this cause *

Artwork is by reservation only, thank you for following!

Thank you for
your part in my
Journey

One night a man had a dream.

He dreamed he was walking along the beach with the Lord.
Across the sky flashed scenes from his life.
For each scene, he noticed two sets of footprints in the sand:
one belonging to him, and the other to the Lord.

When the last scene of his life flashed before him,
he looked back at the footprints in the sand.
He noticed that many times along the path of his life there was only one set of footprints.

He also noticed that it happened at the very lowest and saddest times in his life.
This really bothered him and he questioned the Lord about it.

"Lord, You said that once I decided to follow you,
You'd walk with me all the way.
But I have noticed that during the most troublesome times in my life,
there is only one set of footprints.

I don't understand why, when I needed you most, you would leave me."

The Lord replied,
"My son, My precious child, I love you and I would
never leave you. During your times of trial and
suffering, when you see only one set of footprints,
it was then that I Carried You."
Footsteps
Posted by Stephanie 1 comment: