A treat (for me at least) 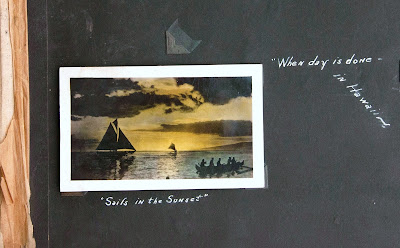 My husband and I took a spur of the moment trip and visited my Dad, who lives a couple hours away, for the weekend.  Every time I visit my Dad I ask him questions, questions about his life growing up in Hawaii, his work in missions, and what my relatives were really like. We lived in a very silent house growing up.  My Father was very quiet and reserved, and you can usually find him working on a computer, taking them apart, analyzing, learning ,or building software.  This was at a time when computers were relatively new and not very many people were working with them yet.  We even had a huge UNIX System ( larger than a refrigerator) with large tape drives in my bedroom for a while. He would take it all apart just to see how it works.  Asking my dad anything remotely significant is like Dr. Lanning's Hologram in the movie I Robot, when he says to Detective Del Spooner "My responses are limited... You must ask the right question"

We were looking though some old photographs that my Grandmother had in an album.  Both my Grandmothers were artists but they were very different from one another, one of them was a folk artist and the other was an artist and a seamstress.  She designed album covers, note-cards, clothing and even menus.  Looking though the photos, I was particularly drawn to some vintage Hawaii pictures in an album that were hand painted by her from the 40s,50s or 60s. They were right up my alley with palm trees, sunsets, sail boats, light house and even hula girls, everything that would come to mind when you think about old Hawaii in that era.


One black and white photo was loose and from the same camera.  It was a photo of a metal looking cross with many people around it.  We studied and analyzed this picture for a long time.  It just gave me chills to see the people there and their expressions on their faces, and their body language on that hill in this photo! Hawaiian men and women, sailors, tourists, a man standing in front tipping his hat are a part of the moving images of this little photo. The photo looks like it was taken in the early 60s after the bombing of Pearl Harbor.  My Grandmother was there during the bombing of Pearl Harbor and lost her fiance during the bombing.  This is her hand written account to one of my brothers...http://www.bannerandsail.com 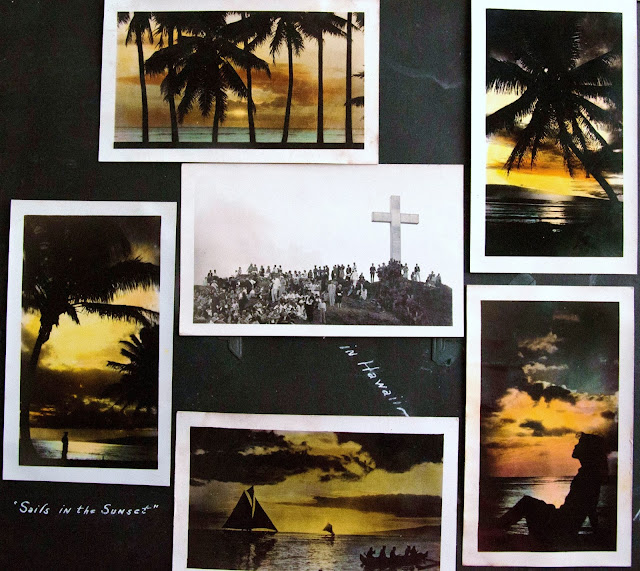 We even have some of the parachute silk that was lying on the beach after the bombing of Pearl Harbor.  She made it into baby clothes for my dad and even embroidered a little on them. 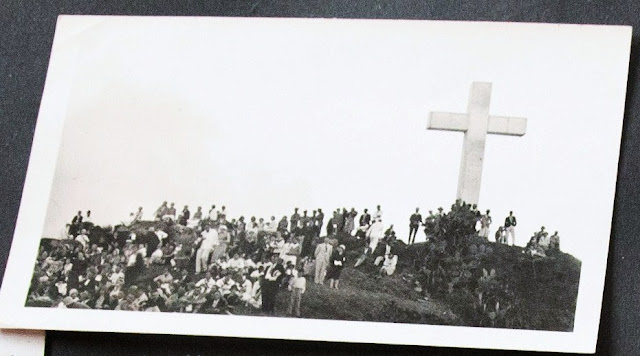 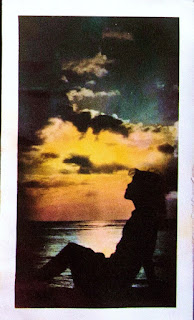 I didn't even notice the writing on the back of the photo.  I was too enthralled with the photo and the sheer story behind it, and what it was really saying.
The only information, regarding the cross on the photo, I was able to find so far on the internet is this:


Kolekole Pass Cross. Shortly after World War II, a 25-foot wooden cross was erected at Kolekole Pass, but the military replaced it with the steel version in 1962.The U.S. Army removed a 35-ton, 37-foot-tall white steel cross from Schofield Barrack's Kolekole Pass on Oahu in late October, after a lawsuit was filed by Hawaii Citizens for the Separation of Church and State on September 11.
It it said that one wave of Japanese planes came through this pass & strafed Wheeler Field, then headed to Pearl Harbor December 7, 1941,but some say most planes came from the south.

There is a beautiful picture of Billy Graham with this same cross on the web.  Apparently the metal cross had a door inside where children played.  My Grandmother's feeling at this site when she took this picture just gives me chills!

This is written on the back of the photo in her own hand writing... 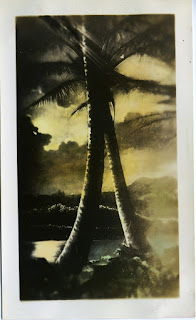 When we view these living pictures,
let us pause and call to mind
one whose ever-living presence
is within our hearts enshrined." 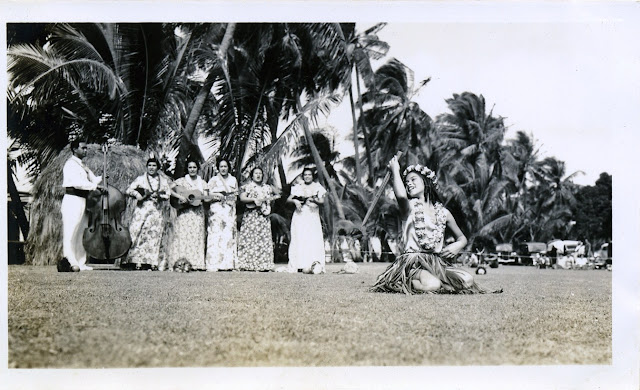 We knew our Grandmother as being outgoing and really pretty glamorous.  A few Christmas's she came over with her long glamorous gown, with a slit up to her hip with sequins in all different colors hand sewn over the whole entire dress. As grand kids we would just marvel at her when she came over a few times a year.  This is a photo of her in the white dress. 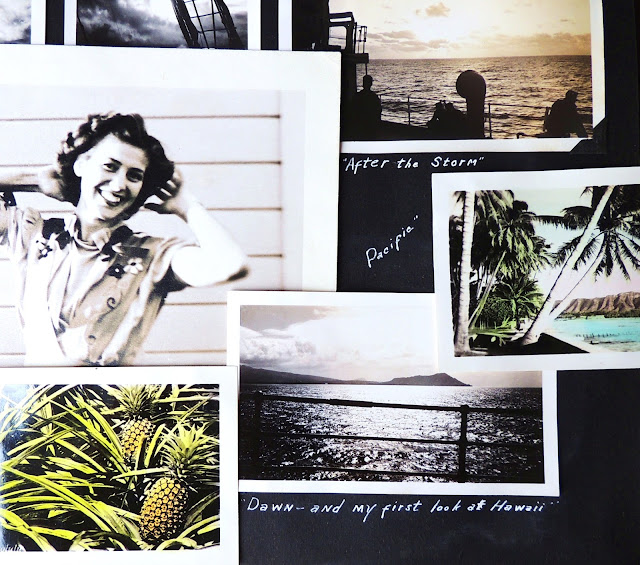 I was told that my grandmother was not a religious person at all.  She died when I was in high school and my mother prayed with her when she was ill at the end of her life. With the information I have found on my own I feel like she did had some faith and found evidence in an old bible that she wrote some questions and notes in. 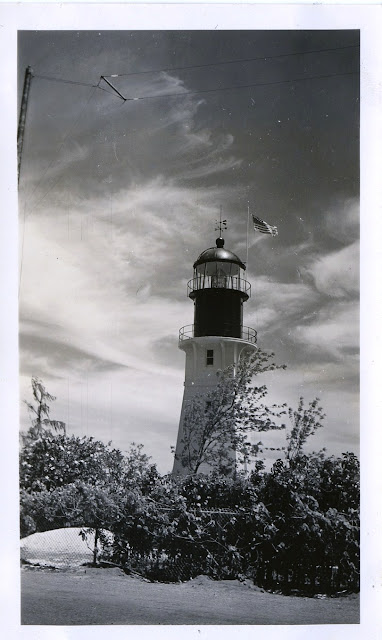 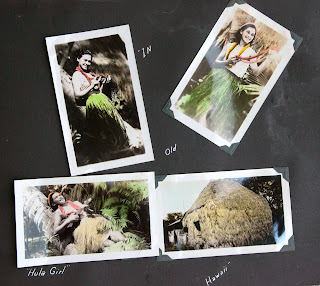 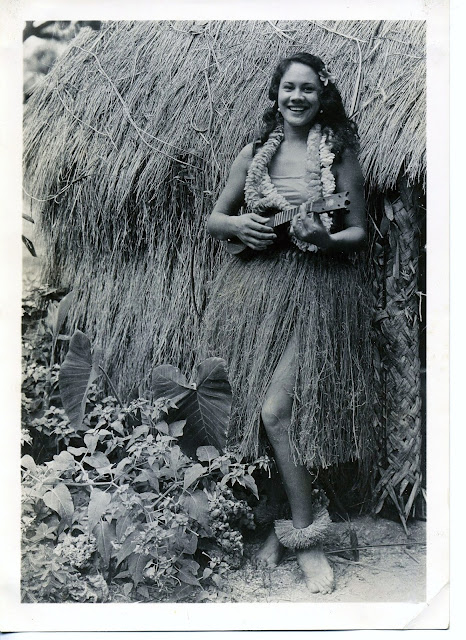 Let them give glory to the LORD and proclaim his praise in the islands.
Isaiah 42:12
Posted by Stephanie