A Voice for Childhood

Throughout his life, Albert Einstein would retain the intuition and the awe of a child. He never lost his sense of wonder at the magic of nature's phenomena-magnetic fields, gravity, inertia, acceleration, light beams-which grown-ups find so commonplace. He retained the ability to hold two thoughts in his mind simultaneously, to be puzzled when they conflicted, and to marvel when he could smell an underlying unity. "People like you and me never grow old," he wrote a friend later in life. "We never cease to stand like curious children before the great mystery into which we were born.
Walter Isaacson
As we are approaching a new season, the weather is starting to get cold and the days are getting shorter, I can't even explain how crazy the last few months have been.   I really felt as if I have been juggling many things all at once only to conclude that God has been carrying all of it all along. 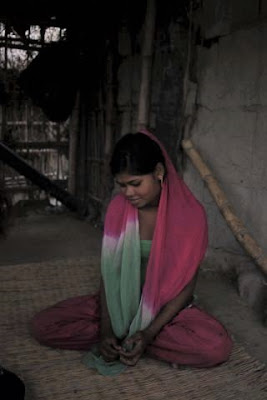 Over the summer I painted 8 paintings that had to do with World Vision's work around the world. Seen Here  All have sold except one that is on display at a place locally and this one, Nirma's Story.
Painting number 5 of my summer project series. I think I connected with this one the most out of all of them so far.  I am a folk artist not a realist, but I really did want to capture her expression on her face. Her name is Nirma, she’s 15 years old and was one week away from her wedding to a much older man and it was stopped just a week before her nuptials, and she was grateful to be able to learn some technical skills. I painted the partial window with the blue skies to represent hope and beauty on the horizon. Thank goodness the marriage was stopped for a few years and this girl was able to learn new skills for a good future.
Photo credit Nissi Thapa/World Vision 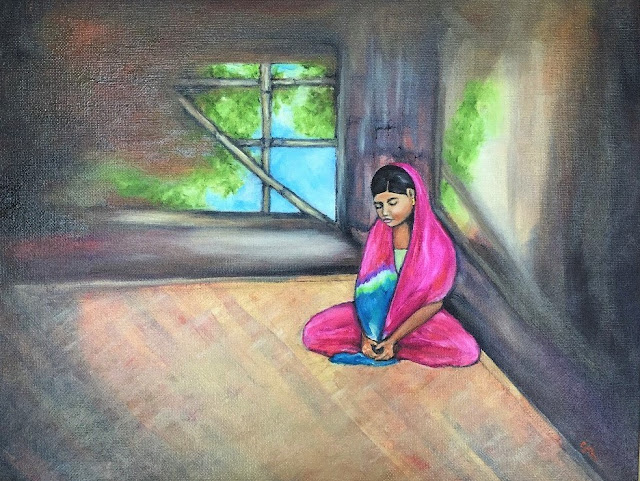 As a grandmother of two and a third one on the way, I have recently faced the fact that I will always have "childlike wonder" in life, my approach is alway to look at things through a different lense, at all angles, putting myself in someones elses shoes.  My own grown girls scolded me for something the other day, (in a funny way) they have grown up to be such lovely and mature young ladies! :) 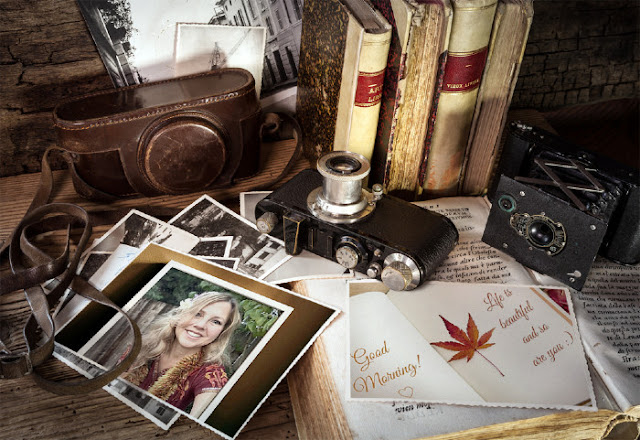 This particular photo of Nirma says to me that she is a very young girl and has no choices, not like my girls (three including my exchange student, Im wearing her necklace here) My girls really got to do amazing things and are still growing in many ways, but of a girl with the harsh reality that her childhood will end that very  moment. No time to find out what she is gifted to do in this life.  I knew by this being the last painting in my possession that I wasn't done, and there was more to the story.  A story of child marriage in general and while Nirma was spared that day, many more children are still facing this every day. 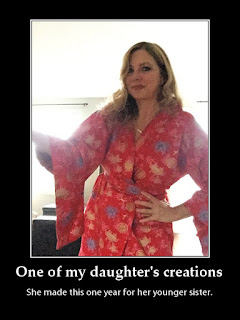 I have to dress up for Halloween for the first time in 40 years! (Wow that sounds old):) It is true, while I have been balancing all that has been going on, I have to find a costume for work, so I picked up a second hand outfit that looks like it could be from India, Bangladesh, Nepal or somewhere close to one of those areas and began to do my research. My older daughter hand sewed all her and her younger sister's costumes every year, all I had to do is sit back and see what glorious costume she came up with.  I wanted to do something that went with this last painting.  A bride, maybe not a child bride, but maybe a loving grandmother standing up for these girls in the only way I know how, my voice. 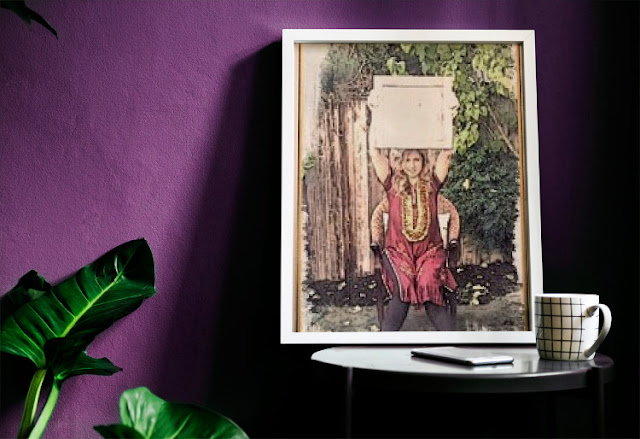 It wasn't until I started researching child marriage that my heart began to break for these children!  My heart did break for Nirma, but her story ended well.  I learned that many laws are placed to protect children from early marriage, but that is not stopping this practice in rural areas.  It is still believed to this day that a family will go to heaven if they give their child in marriage before their first menstruation.  Girls are seen as a burden and another mouth to feed when a poor family would rather put what little resources they have into boys.  For the girl herself, child marriage is devastating to her future, economical, and emotional wellbeing.
I think one of the most heartbreaking things is that when a child is widowed. Nepal has one of the highest child marriage rates, 51 percent of all girls marry by 10-13 years old, according to UNICEF.  Nepal is just the place where my painting is from, but child marriage is happening around the world, children fleeing violence feel they have no other alternative than to marry early in some areas.
In Nepal when a child is left widowed they have a stigma on them of bad luck all their life.   They have to wear only white, no colors and are banned from social gatherings, even with their family.  They are not allowed to remarry or even look a man in the eyes and can't eat meat or fish and some are even burned.  Yes really, some are covered in kerosene and burned alive.

"I painted the partial window with the blue skies to represent hope and beauty on the horizon".
My heart breaks for these kids!  I know that these places are fighting hard to change laws and in some cases are winning and laws are now being set, but I think it's up to the older generations to intervene and change the heart and mindsets of these old traditions and stand up for these kids today.  The role of the elders and the grandparents are more valuable than gold for a good future for these girls.
All of these views are my own. 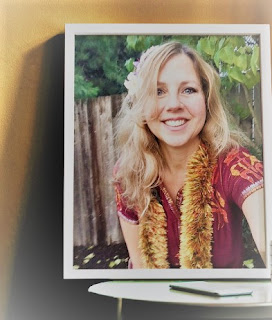 To learn more about this issue and how World Vision helps young girls at risk for child marriage around the world, click on this link... Child protection

Sponsor a Girl like Nirma and help her have a bright future.

Likewise, teach the older women to be reverent in the way they live, not to be slanderers or addicted to much wine, but to teach what is good.  Then they can urge the younger women to love their husbands and children,  to be self-controlled and pure, to be busy at home, to be kind, and to be subject to their husbands, so that no one will malign the word of God.
Titus 2:3-5

For I know the plans I have for you,” declares the Lord, “plans to prosper you and not to harm you, plans to give you hope and a future. Then you will call on me and come and pray to me, and I will listen to you.  You will seek me and find me when you seek me with all your heart.