Folk art and a story

Updated on Dec 10 2016...Just finished my last event for the year! The lady that bought this piece was moved to tears by this artwork, "The Little Match Girl". I am SO humbled by this response! I can not believe someone would be so moved by something I did. She went into how this piece made her feel and the people that she connected it to in the past. Her friend then told me that she never done this in all the years she has known her! The event ended up having a small turnout because it was so cold... and only one child got sponsored. A vendor that was across from me used to be homeless and now sponsors three children with World Vision, all because he can understand how it feels with compassion. We were all very cold at this event and chilled to the bone, I can't even image what it would be like being homeless and on the street, especially for a child. (sorry for my ramblings) Banner and Sail: Folk art and a story.


When my grandson comes to visit we get caught up on all the new animated movies. One of the most recent movies we watched with our grandson was a series of short stories by Pixar. The little Match Girl was one of those stories, and I remember seeing it as a child so vividly.

In those days not too many things would hold my attention. A free spirited child always with my head in the clouds, it would be almost be impossible for me to pay attention to things that didn't interest me. Remember "that girl" who stood up in class and proceeded to share the story behind why her dog ate her homework? Yes that was me, and my dog really did eat my homework! Most kids would have kept that to themselves and be cool, but not me. Because it was true I felt like it should be shared publicly, and the look on my teacher's face was classic.

The little match girl by Hans Christian Andersen was a story that did in fact catch my interest. It was all visual with no words and it still managed to catch my attention in a way that it would remain to this day.

If you never heard the story, it is about a little girl selling matches on a cold blistery night. Unable to sell a single match and unnoticed by the passers-by ,she eventually retreats to an alley to try and get warm. Alone with her thoughts and hoping for a little comfort, she strikes one of her matches and it burned so bright that a wonderfully lighted scene appeared on the wall. A warm stove and a table full of food filled the scenes before her. Her last bundle of matches showed her a scene of someone that loved her very much. The scene was a warm memory of her grandmother that assisted her into glory. 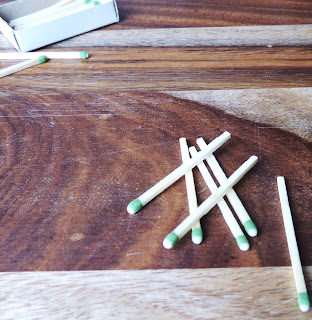 How many times I wonder if I had been the passers-by, too busy to notice someone's desperate need. All someone had to do was buy a match from this poor child, offer shoes and a blanket, or a piece of bread. Even small acts of love would have changed things for this little girl. I know this is a fictional story but is it really?

If our eyes were open I think we could still see this story in the world we live in today. Children hungry, under-dressed and under-prepared for cold weather. Or maybe it's a child feeling unnoticed and unwanted because they lost their parents and have to reassure themselves everyday "my parents really did truly love me".


This is my folk art version of the "The Little Match Girl" done with threads and paint on linen. Hopefully this story will touch your heart like it did mine. 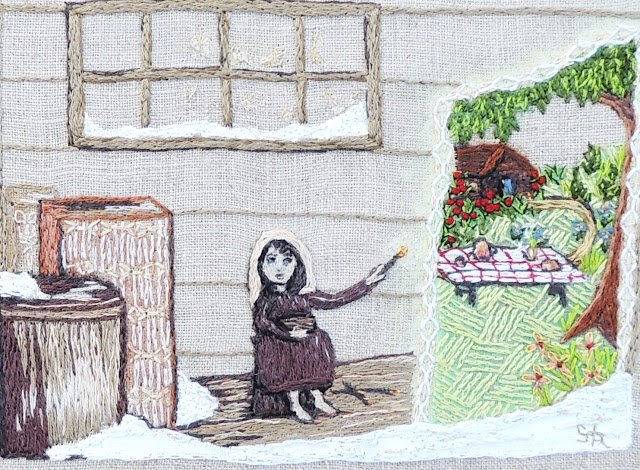 https://www.worldvision.org/sponsor-a-child?campaign=226220126
In reply Jesus said: “A man was going down from Jerusalem to Jericho, when he was attacked by robbers. They stripped him of his clothes, beat him and went away, leaving him half dead.  A priest happened to be going down the same road, and when he saw the man, he passed by on the other side.  So too, a Levite, when he came to the place and saw him, passed by on the other side.  But a Samaritan, as he traveled, came where the man was; and when he saw him, he took pity on him.  He went to him and bandaged his wounds, pouring on oil and wine. Then he put the man on his own donkey, brought him to an inn and took care of him.  The next day he took out two denarii and gave them to the innkeeper. ‘Look after him,’ he said, ‘and when I return, I will reimburse you for any extra expense you may have.’
“Which of these three do you think was a neighbor to the man who fell into the hands of robbers?”
The expert in the law replied, “The one who had mercy on him.”
Jesus told him, “Go and do likewise.”
Luke 10: 30-37